The EŁK Masurian Song and Dance Ensemble comes from Ełk, the largest and most populous town located in the Warmia-Mazury Province, and the main industrial and cultural hub in Masuria. The ensemble is a multigenerational group that brings together both children and youth, students and the elderly. It was founded at the Ełk Culture Centre in 2001. Over the 20 years of its operation it has educated dozens of singers, dancers and musicians. Currently, it numbers 145 performers. Many of the ensemble’s alumni are excellent teachers - instructors who cultivate folk traditions, both in the EŁK and other groups throughout Poland. For the last twenty years the ensemble has been reconstructing forgotten customs and rites from Masuria, along with music, ditties, songs and dances, which are included in such programmes as “After Shrovetide”, “Masurian carolling”, “Masurian games” and “Morcinki”, thereby bringing back the forgotten history and traditions of the region. Thanks to the many years of endeavours and hard work, it has been possible to gather music, characteristic dances, songs, as well as rites and Masurian games, and to separate them from the ethnographic region of Warmia. The ensemble’s repertoire also includes eighteen separate presentations of dances, songs and ditties from other Polish regions, as well as national dances. Over the twenty years of its operation, it has represented Poland during 64 trips to 27 foreign countries, e.g. Korea, China, the United Arab Emirates, Morocco, Egypt and many others. EŁK has also originated and organized the following cultural events: RAINBOW World Folklore Festival (18 editions) and the “Mazurskie Guziny” All-Poland Folk Workshops (8 editions). At the Festival of the Children of Mountains the ensemble will present a programme entitled “Masurian Dances and Games,” including, inter alias, “żabka”, “zajączek”, “hajduk”, “krakowiak”, “stara baba”, “walczyk”, “polka mazurka”. Piotr Witaszczyk is the ensemble leader, Magdalena Witaszczyk is the choreographer, and Edward Szabat is the musical director. 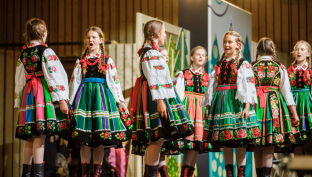 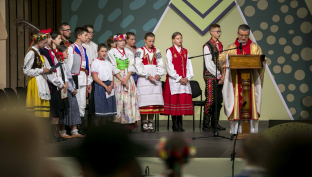